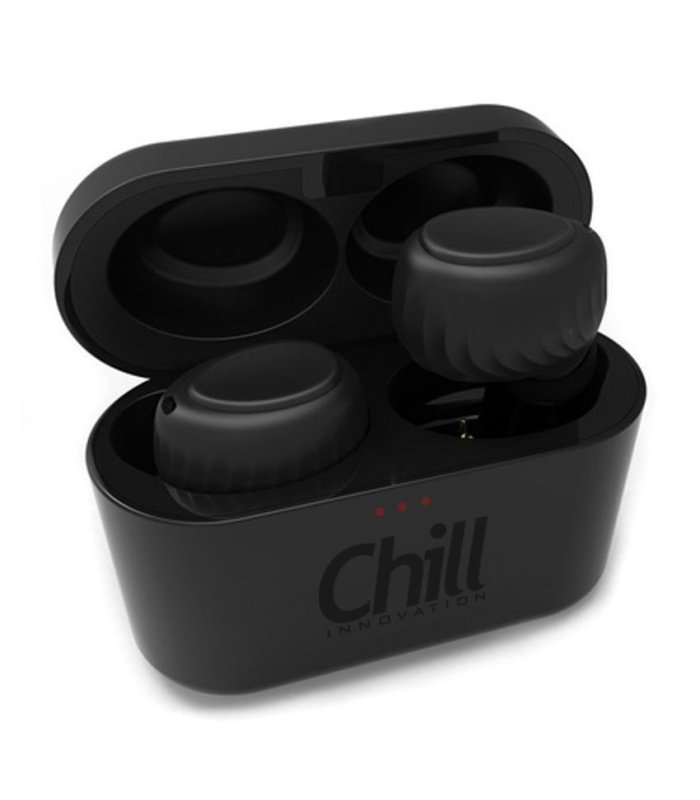 Chill - Power to the People!

Try the products at home

The smart black hi-end Chill TWS headphones are ultra lightweight (only 4.7 grams each) and completely cable-free during use. Both earbuds are equipped with powerful Li-Poly batteries each that provide up to 4-5 hours of non-stop music / speech.

The Chill TWS Earphones are delivered in a smart compact Storage & Charging Box. Here you can not only conveniently store the two earbuds, but also charge them wirelessly on the go! With a built-in Powerbank/battery feature, the charging box can deliver up to 3-4 full charges to the earphones, bringing the total operating time up to approx. 24 hours. The Chill HV-358C will also automatically Power-On/Off and link together when taken out of the box for easy use.

The ultra light Chill TWS earbuds comes with 3 sets of soft silicone ear plugs in different sizes (S/M/L) included, so you can customize them for your ears. The ergonomic and IPX4 sweat- / rainproof design ensures good fit and comfort, and also suitable for active sports.

The Chill TWS Bluetooth headset is equipped with hi-end Neodym speakers and 48MIPS dual-Mac DSP coprocessor. This contributes to significantly better dynamics, deeper bass and near lossless Audio on par with even much more expensive In-Ear TWS earphones.

The Chill headset is also compatible with other Bluetooth versions!

Can I use Siri / Google Assistant voice control with the Chill TWS HV-358C headset?:

Yes, double-click on the right headset button to enable Siri / Google Assistant (if supported by the host).

My new Chill TWS HV-358C earbuds do not sound so good?

Initially, the sound may appear a little metallic / sharp / limited bass etc., since the speaker membranes need to be excersised. It takes up to 20 hours of playback before reaching its maximum sound and depth. So have some patience - it's going to be worth it :-)

I have trouble charging:

The explanation should typically be found among the following:

- Always wipe charging pins on the headset and possibly the charging box before charging, as sweat / skin grease can prevent proper contact.

- If the Charging Box is fully depleted, this will automatically charge first for a while, before headset charging begins (Only charging box LED will light, despite headsets are in the box during this proces).

- Do not connect the Charging Box to constant power from the USB charger for many hours / overnight, but turn off / disconnect it after charging ends. Otherwise, the charging box / headset will be prevented to enter standby and will cause unnecessary tear and wear on electronics and batteries.

- Batteries and electronics are automatically calibrated during full cycles (full charge and discharge), but as there are 3 batteries at stake (charging box + 2x headset), you can get in situations where one or more batteries never really get any full cycles. Eg. the power consumption is not quite the same in both headsets. This can affect both the performance of the batteries as well as the actual battery capacity display, which then becomes inaccurate / misleading. In that case you can run all the batteries flat and then fully charge them afterwards, to ensure they get a full cycle each.

- The theoretically lifetime for Li-Polymer batteries are around 300-500 cycles in perfect conditions. Especially storing batteries in a depleted state, high temperature fluctuations and heat/direct sunshine can greatly reduce capacity / lifetime. If/when you experience reduced capacity, you can try to do a calibration (see above) to potentially improve the performance.

I can not link both earbuds together for Stereo use:

If you want to use the Chill HV-358C TWS earbuds together (stereo), they must first link with each other before connecting them to the phone / tablet:

2. Then, remove both earbuds from the charging box. Usually they will power on automatically, or else shortly press BOTH headset buttons: They should say: Power on ... Your device is connected)*

3 Then activate Bluetooth on your phone and pair with the HV-358.

* If they do not say: 'Power on... Your device is connected' when powered-on according to the procedure, but instead say 'Power on... Pairing', the headsets are not linked together for Stereo use. In that case: Turn on both headsets, and right after the "Power On" sound, double-click quickly on both headsets. There will be various beep sounds in both and after 5-10 seconds the will be linked together (say: Your device is connected). If not, repeat the steps and try to keep them closer together.

How do the LED indicators work on the Charging Box:

If the Charging Box is fully depleted, it will automatically charge itself for a while, before starting to charge the two headsets. During this proces the headset indicator LEDS will not light up - only the charging box LED.

One headset runs low on battery before the other?

For stereo use, the LEFT headset is the Master - the one which receives the signal from your phone, and sends it to the RIGHT headset (Slave). The power consumption will therefore always vary somewhat in both headsets depending on the signal quality, distance between the telephone and headset, other disturbing wireless signals in the air, blockages from your clothes / walls etc. and overall music volume.

One can thus obtain some power savings, by of course lowering the volume, but also by ensuring to have the shortest distance between the phone and the LEFT headset. Operating distance and which clothes / bag / pocket you use, whether the phone is facing up or down etc., all affect the signal quality and thus the power consumption.

I periodically experience outcomes in the sound:

Sound loss is unfortunately not quite uncommon for Bluetooth and is typically a result of signal disturbances.

The LEFT headset is the master and receives the signal from the phone and this is sent to the RIGHT headset. The forwarded signal will always be weaker than the primary signal as there is a natural signal loss here. In case of signal disturbances, the right headset will also be the first one to loose it. For the same reason, the left can not loose the sound without the right side as well.

Signal disturbances typically occur due to other more powerful wireless signals nearby (at 2.4Ghz), physical blockages of the signal from, eg. clothes, caps, bags, a relatively weak bluetooth signal from the host and/or combinations thereof.

Signal disturbances can be difficult to overcome depending on the phone, usage pattern and the environment. The basic transmitting power is controlled by the sender and the antennas are built into the Bluetooth chipsets at both ends. So unfortunately, there is not really anything you can do to increase the Bluetooth transmit power and frequency. It is a fairly closed standard.

Often, however, one can get better signal by experimenting with which clothes / bag / pocket you keep the phone in, whether it is up or downside. Since the LEFT headset is the master in stereo, this headset should also have the best signal and shortest distance from the phone.

Especially in crowded / certain areas, there may be a lot of other wireless signals in the air, and this can generally be difficult to avoid. A disturbing signal in the air may / will dodge a weaker signal regardless of the range between the phone and the headset.

In general, Bluetooth outcomes are likely to occur (regardless of brand), as it is a short-range signal that is easily jammed. The problem is greater with TWS headsets, as there are two signals to be transmitted instead of one with regular bluetooth headphones / speakers.

One should be aware that signal delays may also come from one's streaming, as the internet connection is not necessarily constant / stable when moving around.

The counterparty sometimes has trouble hearing me clearly during telephone calls:

Noisy surroundings and wind noise and the like can affect the sound quality, as the microphone is located in the ear and thus will easily catch the surrounding noise too.

Can I get the other party's voice in both headsets during phone calls:

During phone calls, you only hear the opposite party in one headset due to a limitation and/or feature in the Bluetooth chipset itself. Telephony is a mono signal with limited resolution, and this is not broadcasted to both headsets - thus, less power is used and signal quality is increased.

In general, you will also tend to talk louder if you hear counterparty in both headsets. So this can also be annoying.

Yes, if your computer have a built-in Bluetooth module or Bluetooth dongle you can also connect the headset.

A computer have many options for sound devices which can affect the connection and sound quality. In case of low resolution / distorted sound you may have to adjust your sound settings in Windows to use a different codec/device for playback/recordings.

7 other products in the same category:

has been added to compare.
has been removed from compare.
Continue shopping Compare